Book Chapter | Designing Teenage Emotions With a Life of Their Own

Danny: “That’s why I would prefer to keep my emotions in me, just to be sure, because anything can get hacked now.” During the first Prototype summer school at FACT Liverpool, Neil carried out an evaluation of an app designed to support teenagers to describe the interaction of emotions using the movement behaviours of autonomous […] 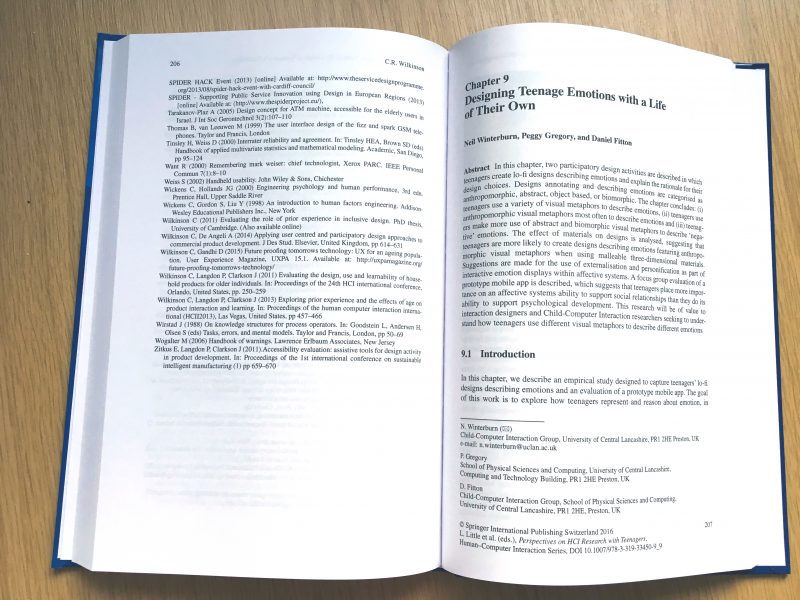 Danny: “That’s why I would prefer to keep my emotions in me, just to be sure, because anything can get hacked now.”

During the first Prototype summer school at FACT Liverpool, Neil carried out an evaluation of an app designed to support teenagers to describe the interaction of emotions using the movement behaviours of autonomous agents. 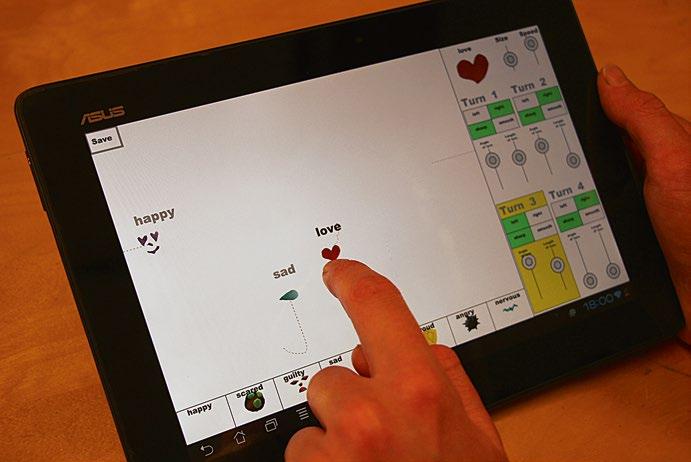 The app design had been informed by participatory design activities carried out with teenagers in Preston as part of an earlier study. The evaluation was used to gain insight into the usability of the app, to elicit innovative design ideas from the group and to stimulate discussion around the ethics of effective systems for teenagers. Findings from this evaluation of the app were included alongside the participatory design studies that informed its design of the app, in a chapter for a book on Teen Computer Interaction for Springer Science.

The group debated the potential benefits and risks of interactive emotions displays.

Josh: “It might help people explain their emotions, if they have difficulty communicating them, they could show them in a visual way.”

Ethan: “If people would be able to view your emotions, you would be more self-conscious about how you were feeling, if people could see that you were angry then people could stay away from you.”

The discussion revealed that for this group of teenagers affective systems should support not just personal development, but also social relationships, whilst maintaining privacy. From the discussion it became clear that teenage adoption of interactive systems to display emotions would require high levels of trust in the security of the system.

The importance of technologies ability to support vital peer relationships has been identified by Read (2013) and Fitton (2014), but its importance to the design of affective systems to this group is new. Read and Beale ( 2011) have offered useful methods to capture teenage perceptions of safety and privacy in cloud computing. The challenge of designing affective systems that support teenagers to develop the ability to describe, reason about and share emotions and respond to their need for tighter social relationships with peers whilst maintaining their right to privacy is new to HCI.

See the book chapter published on the Springer website.

Transcript of interview in Study 3, from chapter ‘Designing Teenage Emotions with a Life of their Own’.

Researcher: “How do you think teenagers like Ian or Amanda would feel about using something like this?”

Ella: “I think it would be quite helpful to them, because teenagers are meant to be in a time of struggle and you’re just realizing who you are and who you want to be, so therefore, using something like that to gather your emotions might be helpful, instead of having to talk to someone about it, you could just collect them all in there.”

Researcher: “How do you think that teenagers like Ian or Amanda would feel about sharing something that they did using something like this, with other people? How would that work? What would be the positives and negatives with it?”

Kate: “It might help people explain their emotions, if they have difficulty communicating them, they could show them in a visual way.”

Researcher: “What are the risks with people putting their emotions out there?”

Ella: “If someone knows you and they go on to your tablet and find out that you were angry or whatever, then they then know what you felt angry over and what you did that day, therefore they could start making you feel angry again.”

Ethan: “I had another positive, for people with Asperger’s who might find it hard to find emotions, this could be really helpful, and it could be an easy way.”

Danny: “It might not help that much though, because it’s still just sliding things up or down.”

Researcher: “If we were to imagine the 100 years from now and think about the technologies that we might be having then, if the sky is the limit and we are thinking these slider things don’t give you that much control, and they aren’t that much fun, then what could we have instead?”

Jacob: “In a hundred years, they could actually, allow human minds to get access to the internet, via virtual replicas of ourselves we could make games of our own.”

Researcher: “Would anyone fancy that?”

Researcher: “So is this what you are saying, that there could be virtual versions of yourselves, so your thoughts could be on the internet.”

Jacob: “Well technically you would be on the in the internet, not on, but in.”

Researcher: “If your emotions are in the internet, then what are the positives and negatives of that in your everyday life?”

Kate: “They are very public, but that might be a good thing if people were more frank with each other, it would change society though. You would have to try it out on a community of people and see how it would change their behaviour.”

Researcher: “Any more thoughts on if the sky was the limit how those ideas might work?”

Ethan: “If people would be able to view your emotions, you would be more self-conscious about how you were feeling, if people could see that you were angry then people could stay away from you.”

Ella: “You might actually be able to program something to read your emotions, just be reading your thoughts and your face, similar to what he was saying, so it might be better because you wouldn’t have to put in your emotions, it would just automatically know.”

Researcher: “So you wouldn’t have to go through a screen?”

Researcher: “So we were talking about the risk as to people being able to see if you were angry.”

Danny: “People might rather than actually showso their true  emotions, they might want to mask their true emotions and do something different, so not actually show what their emotions are, when other people are looking at it.”

Ella: “There should be a privacy setting, so that people can only see half of the emotions that you want them to see, so that you are able to explore all of your emotions in to make you feel better, but then people can’t see all of them. But the problem with that is the people who need to know, like all of your emotions like your parents or whatever, won’t know because of the private settings, so they wouldn’t be able to find out. Therefore you could just put ‘Happy’ and ‘Cheerful’ when actually you are just depressed.”

Researcher: “So possibly we are just reproducing the same problems that we have in the real world. Any thoughts on how you could get around that?”

Danny: “You could have it like on Facebook, so that when you post something only certain people see it, only the people that need to know.”

Researcher: “Thinking of the people you know, the organizations in your life, businesses, and governments, people that you know in your social life, who would and who wouldn’t you trust?”

Danny: “I wouldn’t trust nearly anyone really. If you think of everything now, it’s all gone public, Facebook and twitter, everyone can see it, so I think your emotions now are the only thing that you’ve got that are private. So if you make that public, then you’ve not got anything to hold onto.”

Ethan: “If you were in street just walking about, you wouldn’t want everyone to know your emotions. Maybe if you could say why you were angry, then people could avoid that, and not just say ‘I’m Angry.’”

Nadine: “You could have more emotions, hungry, jealousy stuff like that.”

Ella: “If someone is out to get you angry, then they would automatically know what they need to do to make you upset and you would just get it every single day, I mean people would know how to make you happy as well so that may help, but if people know how to make you upset, then you are going to end up being so bullied and so miserable that your school life or your work life or whatever, I think it could also increase the amount of suicides because people, are just being upset constantly, so they might just end up killing themselves.”

Ethan: “There should be a way to block them.”

Researcher: “There are loads of risks.”

Ethan: “There are risks with everything though, it’s like social network, YouTube, there’s always a risk, so it wouldn’t just be with that, it would be everything.”

Danny: “That’s why I would prefer to keep my emotions in me, just to be sure, because anything can get hacked now.”